The Framework for Runtime Aggregation of Modularized Entities (FRAME) is a set of modules and support libraries that simplify runtime development. In Substrate, these modules are called Pallets, each hosting domain-specific logic to include in a chain's runtime.

FRAME also provides some helper modules to interact with important Substrate Primitives that provide the interface to the core client.

The following diagram shows the architectural overview of FRAME and its support libraries: 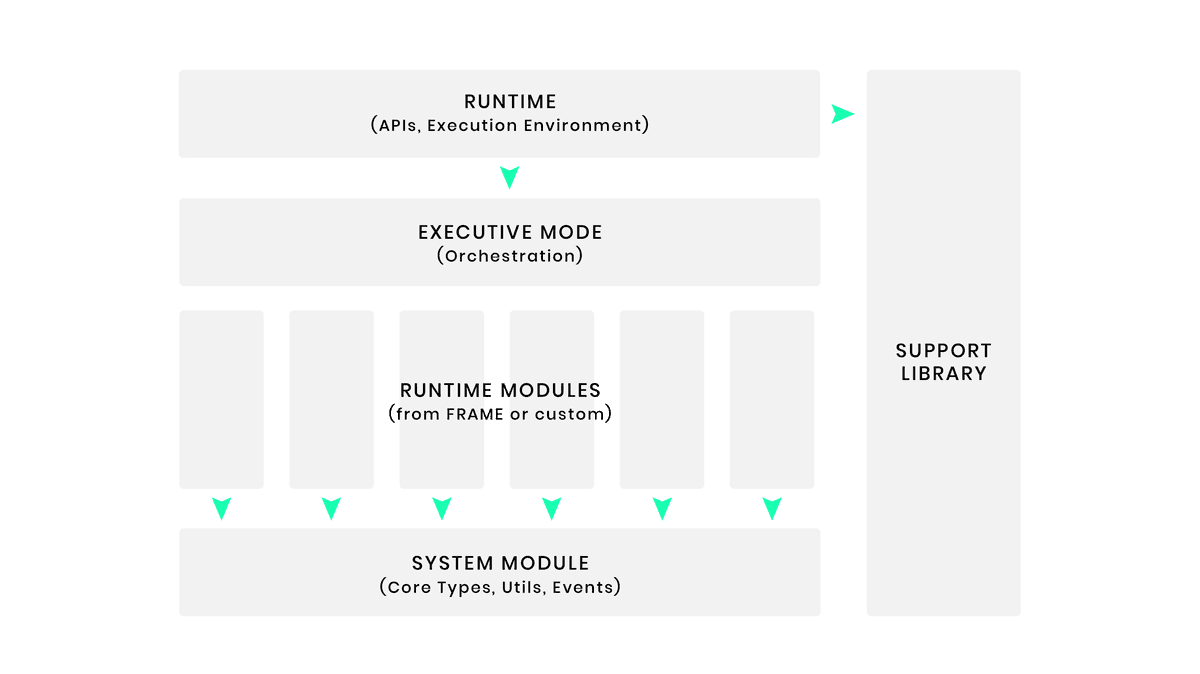 When building with FRAME, the Substrate runtime is composed of several smaller components called pallets. A pallet contains a set of types, storage items, and functions that define a set of features and functionality for a runtime. 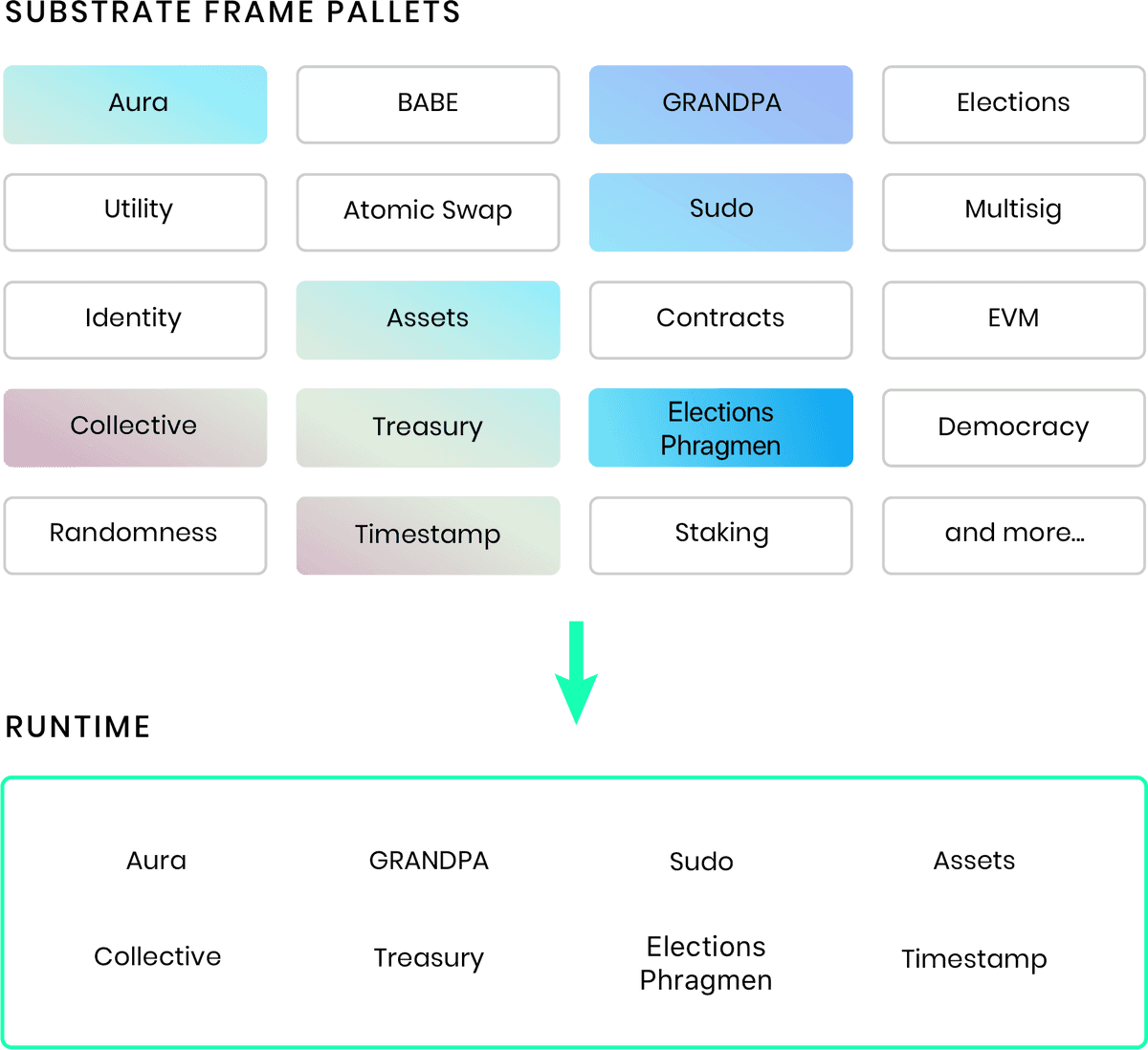 If you are just getting started with Substrate runtime development, we suggest you try our introductory tutorial for creating your first Substrate chain.

FRAME not only provides a library of commonly used Substrate pallets but also a framework to build custom domain-specific pallets, giving runtime engineers the flexibility to define their runtime's behavior according to their target use case. The result is each pallet has its own discrete logic which can modify the features and functionality of your blockchain's state transition functions.

For example, the Balances pallet, which is included in FRAME, defines cryptocurrency capabilities for your blockchain. More specifically, it defines:

Substrate runtime engineers can define custom logics for their blockchain by writing their own pallets and encapsulating their blockchains desired functionality by combining custom pallets with existing FRAME pallets or Substrate modules alike. The following documentation will show you how.

Skeleton of a pallet

A FRAME pallet is composed of 7 sections:

An example is as follows:

Pallets can be composed of as many sections as needed, giving runtime engineers a lot of flexibility on top of the basic skeletons depicted above. Refer to the Substrate Runtime Macros to learn more about adding functionality to a FRAME pallet.

The FRAME System crate frame_system provides low-level types, storage, and functions for your blockchain. All other pallets depend on the System crate as the basis of your Substrate runtime.

The System crate defines all the core types for the Substrate runtime, such as:

It also has a number of system-critical storage items, such as:

Finally, it defines a number of low level functions which can access your blockchain storage, verify the origin of an extrinsic, and more.

The FRAME Support Crate frame_support is a collection of Rust macros, types, traits, and modules that simplify the development of Substrate pallets.

The support macros expanded at compile time generate boilerplate code needed for the common structure of a pallet and save developers from writing them repeatedly.

The FRAME Executive Pallet frame_executive acts as the orchestration layer for the runtime. It dispatches incoming extrinsic calls to the respective pallets in the runtime.

The runtime library brings together all these components and pallets. It defines which pallets are included with your runtime and configures them to work together to compose your final runtime. When calls are made to your runtime, it uses the Executive pallet to dispatch those calls to the individual pallets.

Some pallets will be sufficiently general-purpose to be reused in many blockchains. Anyone is free to write and share useful pallets. There is a collection of popular pallets provided with Substrate. Let's explore them.

The Assets pallet is a simple, secure module for dealing with fungible assets.

A module for atomically sending funds from an origin to a target. A proof is used to allow the target to approve (claim) the swap. If the swap is not claimed within a specified duration of time, the sender may cancel it.

The Authority Discovery pallet is used by core/authority-discovery to retrieve the current set of authorities, learn its own authority ID, as well as to sign and verify messages to and from other authorities.

The Authorship pallet tracks the current author of the block and recent uncles.

The Balances pallet provides functionality for handling accounts and balances.

A pallet that contains common runtime patterns in an isolated manner. This pallet is not meant to be used in a production blockchain, just for benchmarking and testing purposes.

The Collective pallet allows a set of account IDs to make their collective feelings known through dispatched calls from specialized origins.

The Contracts pallet provides functionality for the runtime to deploy and execute WebAssembly smart-contracts.

The Phragmén Elections pallet is an election module based on sequential Phragmén.

WARNING: NOT ACTIVELY MAINTAINED The Elections pallet is an election module for stake-weighted membership selection of a collective.

The Example pallet is a simple example of a pallet demonstrating concepts, APIs, and structures common to most pallets.

A federated naming system, allowing for multiple registrars to be added from a specified origin. Registrars can set a fee to provide identity-verification service. Anyone can put forth a proposed identity for a fixed deposit and ask for review by any number of registrars (paying each of their fees). Registrar judgments are given as an enum, allowing for sophisticated, multi-tier opinions.

The I'm Online pallet allows validators to gossip a heartbeat transaction with each new session to signal that the node is online.

The Indices pallet allocates indices for newly created accounts. An index is a short form of an address.

A module for doing multi-signature dispatches.

Nicks is a trivial module for keeping track of account names on-chain. It makes no effort to create a name hierarchy, be a DNS replacement, or provide reverse lookups.

A module allowing accounts to give permission to other accounts to dispatch types of calls from their signed origin.

The Randomness Collective Flip pallet provides a random function that can be used in tests and generates low-influence random values based on the block hashes from the previous 81 blocks. This pallet is not intended for use in production.

The Recovery pallet is an M-of-N social recovery tool for users to gain access to their accounts if the private key or other authentication mechanism is lost. Through this pallet, a user is able to make calls on-behalf-of another account which they have recovered. The recovery process is protected by trusted "friends" whom the original account owner chooses. A threshold (M) out of N friends are needed to give another account access to the recoverable account.

The Scored Pool pallet maintains a scored membership pool where the highest scoring entities are made members.

The Session pallet allows validators to manage their session keys, provides a function for changing the session length, and handles session rotation.

The Society module is an economic game which incentivizes users to participate and maintain a membership society.

The Staking pallet is used to manage funds at stake by network maintainers.

The Sudo pallet allows for a single account (called the "sudo key") to execute dispatchable functions that require a Root origin or designate a new account to replace them as the sudo key.

The Timestamp pallet provides functionality to get and set the on-chain time.

The Treasury pallet provides a "pot" of funds that can be managed by stakeholders in the system and a structure for making spending proposals from this pot.

A stateless module with helpers for dispatch management.

A simple module providing a means of placing a linear curve on an account's locked balance. This module ensures that there is a lock in place preventing the balance to drop below the unvested amount for any reason other than transaction fee payment.

Last edit: on
Run into problems?
Let us Know
ON THIS PAGE
Pallets
Prebuilt pallets
Next steps