There is often a need to query and/or process off-chain data before it can be included in the on-chain state. The conventional way of doing this is through oracles. While this approach works, it still has several flaws with respect to security, scalability, and infrastructure efficiency.

Off-chain features run in their own Wasm execution environment outside of the Substrate runtime. This separation of concerns makes sure that block production is not impacted by long-running off-chain tasks. However, as the off-chain features are declared in the same code as the runtime, they can easily access on-chain state for their computations. 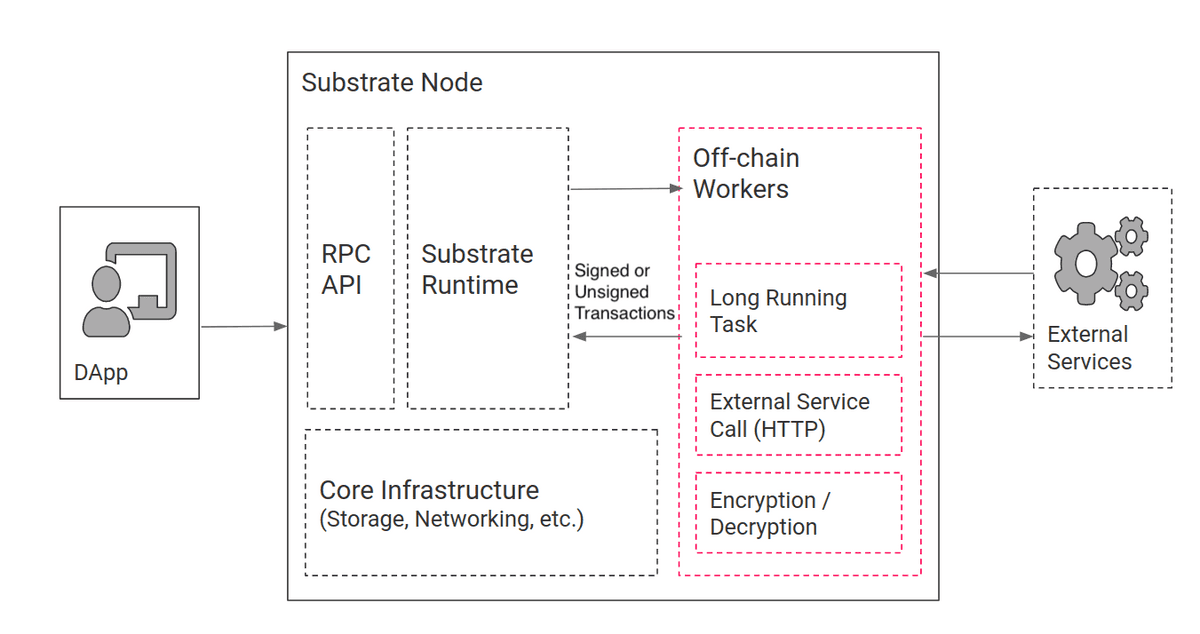 Off-chain workers have access to extended APIs for communicating with the external world:

Note that the results from off-chain workers are not subject to regular transaction verification. A verification mechanism (e.g. voting, averaging, checking sender signatures, or simply "trusting") should be implemented to determine what information gets into the chain.

As its name indicates, the storage is not stored on-chain. It can be accessed by off-chain worker threads (both read and write access) and on-chain logic (write only, refer to off-chain indexing below). This storage is not populated among the blockchain network and does not need to have consensus computation over it.

Off-chain storage serves as a bridge for various off-chain worker threads to communicate to each others and between off-chain and on-chain logics. It can also be read using remote procedure calls (RPC) so it fits the use case of storing indefinitely growing data without over-consuming the on-chain storage.

Storage in the context of blockchain is mostly about on-chain state. But it is expensive (as it is populated to each node in the network) and not recommended for historical or user-generated data which grow indefinitely over time.

We have off-chain storage for this purpose. In addition of being accessible by OCWs, Substrate also includes a feature called "off-chain indexing" allowing the runtime to write directly to the off-chain storage independently from OCWs. Nodes have to opt-in for persistency of this data via --enable-offchain-indexing flag when starting up the Substrate node.

Unlike OCWs, which are not executed during initial blockchain synchronization, off-chain indexing is populating the storage every time a block is processed, so the data is always consistent and will be exactly the same for every node with indexing enabled.

To look at concrete examples of off-chain workers and how to use them in runtime development, refer to the following sections in Substrate Recipes: