This part will teach you everything you need to know to get started building smart contracts on Substrate with ink!.

1. Installing prerequisites on your computer

2. Starting a new project with cargo-contract

3. Building and testing our contract

4. Deploying our contract on a local Substrate node

5. Interacting with our contract using the Canvas UI

To follow this tutorial, you will need to set up some stuff on your computer.

Follow the official installation steps to install the prerequisites.

Once you have done the above you will also need to run:

The final tool we will be installing is the ink! command line utility which will make setting up Substrate smart contract projects easier.

As a prerequisite for the tool you need to install the binaryen package, which is used to optimize the WebAssembly bytecode of the contract.

If you are using Ubuntu, Debian or MacOS, you could install it directly:

If you're unable to find a version of binaryen compatible with your OS, you can download the binary release directly.

After you've installed the package execute:

You can then use cargo contract --help to start exploring the commands made available to you.

We are going to use the ink! CLI to generate the files we need for a Substrate smart contract project.

From your working directory, run:

This command will create a new project folder named flipper which we will explore:

The ink! CLI automatically generates the source code for the "Flipper" contract, which is about the simplest "smart" contract you can build. You can take a sneak peak as to what will come by looking at the Flipper Example.

The Flipper contract is nothing more than a bool which gets flipped from true to false through the flip() function. We won't go deep into the details of this source code because we will be walking you through the steps of building a more advanced contract!

You will see at the bottom of the source code there are simple test cases which verify the functionality of the contract. We can quickly test this code is functioning as expected using the off-chain test environment that ink! provides.

In your project folder run:

To which you should see a successful test completion:

Now that we are feeling confident things are working, we can actually compile this contract to Wasm.

Run the following command to compile your smart contract in the Flipper project directory:

If you run into a call to unsafe function error, run cargo install --force cargo-contract && rustup update to make sure everything is up to date.

Let's take a look at the structure of metadata.json:

This file describes all the interfaces that can be used to interact with your contract:

If you look closely at the constructors and messages, you will also notice a selector which contains a 4-byte hash of the function name and is used to route your contract calls to the correct functions.

In the next section we will start a Substrate Smart Contracts node and configure the Canvas UI to interact with it.

After successfully installing substrate-contracts-node, you can start a local development chain by running:

You should start seeing blocks being produced by your node in your terminal.

Go to the hosted version of Canvas UI to interact with your node. You first need to configure the UI to connect to it: 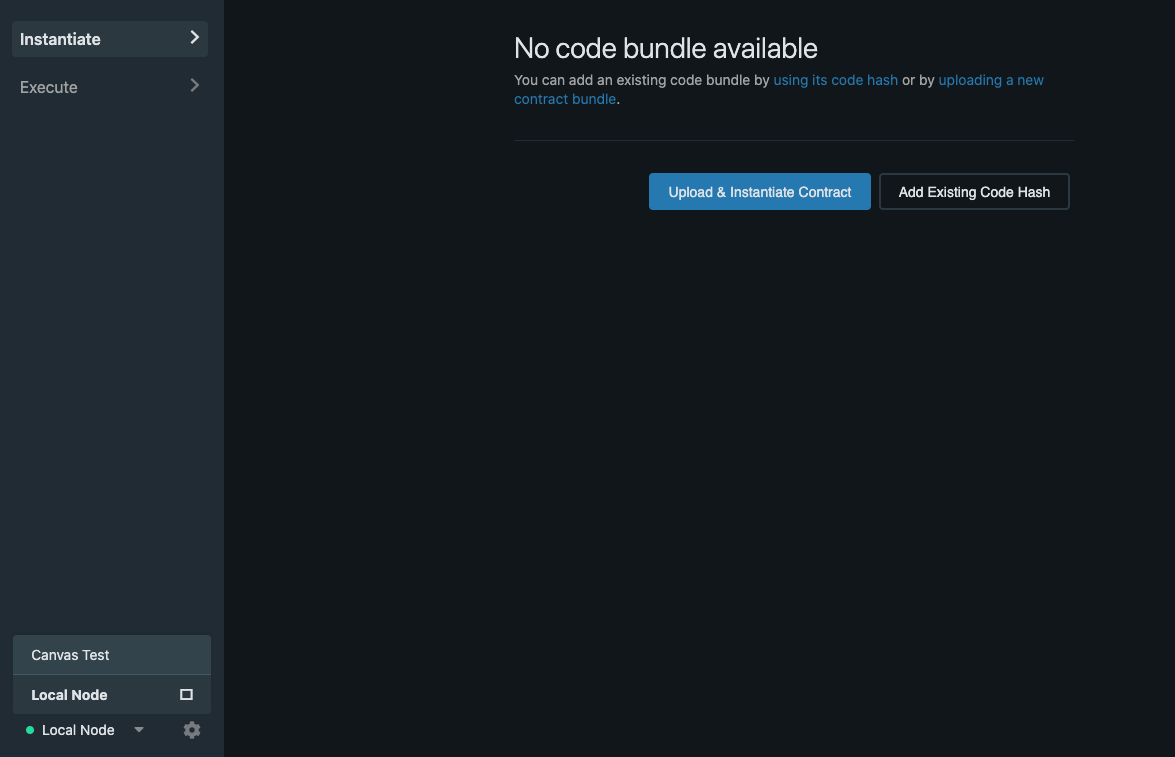 Now that we have generated the Wasm binary from our source code and connected to a local node, we want to deploy this contract onto our Substrate blockchain.

Whereas a completely new blob of smart contract source code is deployed each time you push a contract on other platforms, Substrate opts to optimize this behavior. For example, the standard ERC20 token has been deployed to Ethereum thousands of times, sometimes only with changes to the initial configuration (through the Solidity constructor function). Each of these instances take up space on the blockchain equivalent to the contract source code size, even though no code was actually changed.

In Substrate, the contract deployment process is split into two steps:

With this pattern, contract code like the ERC20 standard can be put on the blockchain one single time, but instantiated any number of times. No need to continually upload the same source code over and waste space on the blockchain. 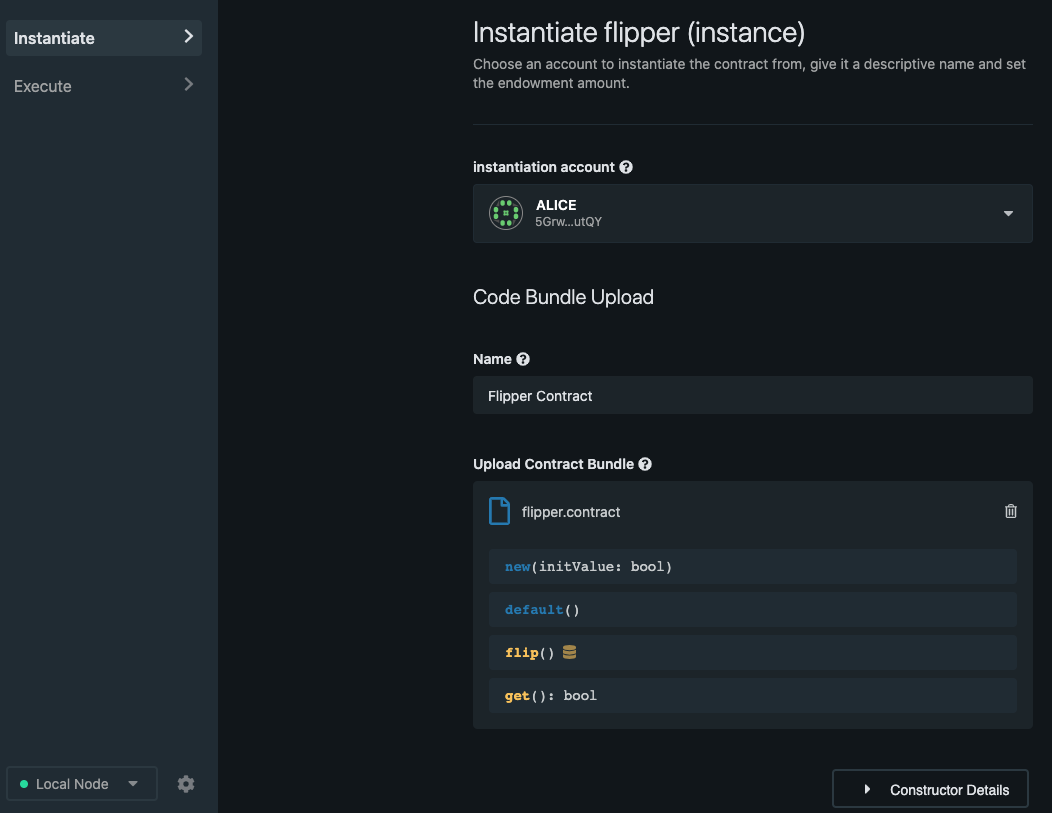 2. Instantiate a Contract on the Blockchain

Smart contracts exist as an extension of the account system on the blockchain. Thus creating an instance of this contract will create a new AccountId which will store any balance managed by the smart contract and allow us to interact with the contract.

Now a screen displays the information that represents our smart contract. We are going to instantiate a copy of the smart contract: 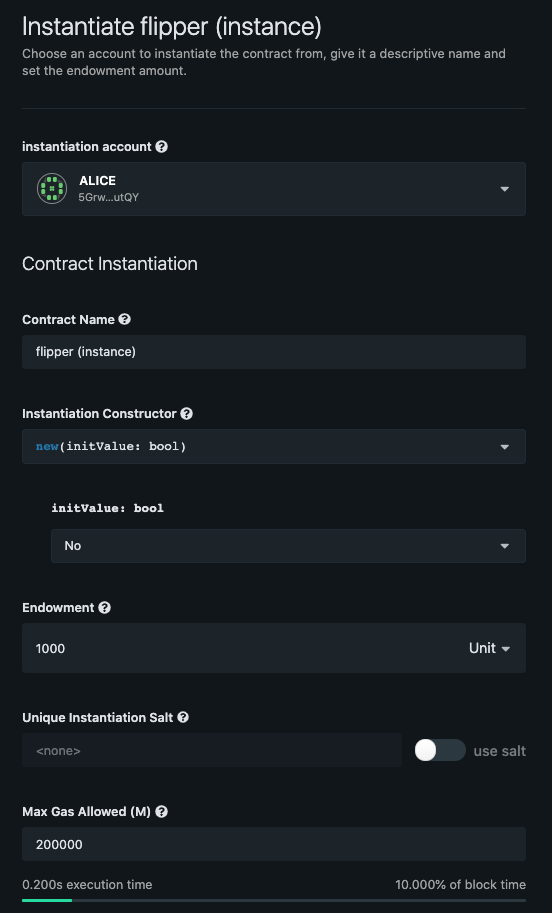 Note: As mentioned earlier, contract creation involves creation of a new account. As such, you must be sure to give the contract account at least the existential deposit defined by your blockchain. We also need to be able to pay the contract's rent (endowment). If we consume all of this deposit, the contract will become a tombstone. We can always refill the contract's balance and keep it on chain.

When you click Instantiate, and in the next confirmation screen Sign & Submit, you should see the extrinsic contracts.instantiateWithCode is called, and a flurry of events appear including the creation of a new account (system.NewAccount) and the instantiation of the contract (contracts.Instantiated):

Now that your contract has been fully deployed, we can start interacting with it! Flipper only has two functions, flip() and get() so we will show you what it's like to play with both of them. Click the Execute button under the contract after you instantiate the Flipper contract in the previous step.

Take a look at our contract's default() function, we set the initial value of the Flipper contract value to No when we instantiated the contract. Let's check that this is the case.

In the Message to Send section, select the "get(): bool" message and accept the default values for the other options.

Press "Call" and confirm that it returns the value false: 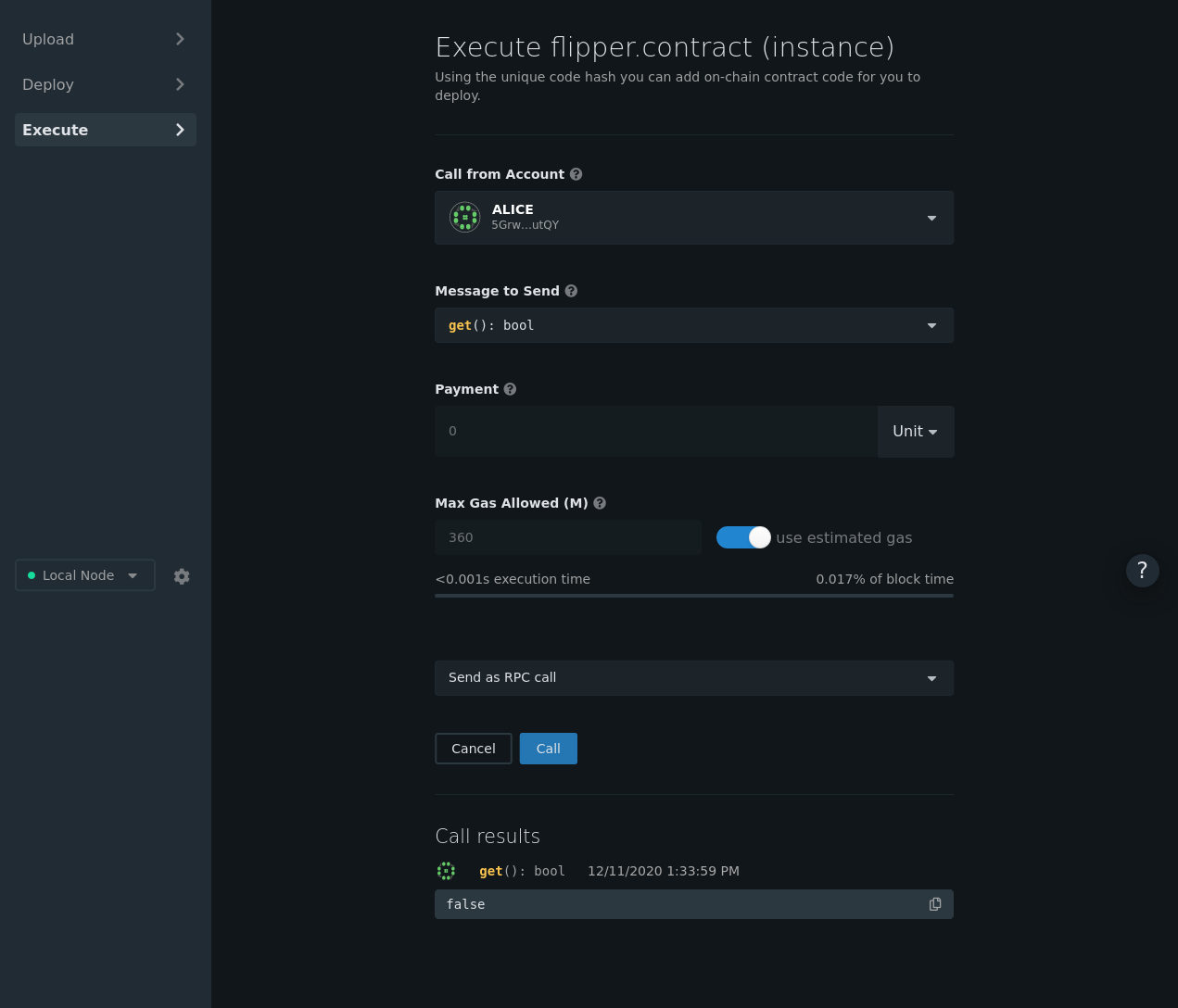 You might be wondering "Why did we need to specify gas when reading a value from a contract?" If you notice right above the "Call" button is a dropdown select box that allows you to "Send as RPC call" or "Send as transaction". For a read-only request like this, we can simply use an RPC call which will simulate a transaction, but not actually storing anything on-chain. Thus, you will still need to specify the right amount of gas to cover your "virtual fee". But don't worry, nothing will be charged when making a call this way. 🙂

The alternative message to send with the UI is flip(). Again, accept the default values for the other options.

You will notice that the flip() message defaults to a transaction call. 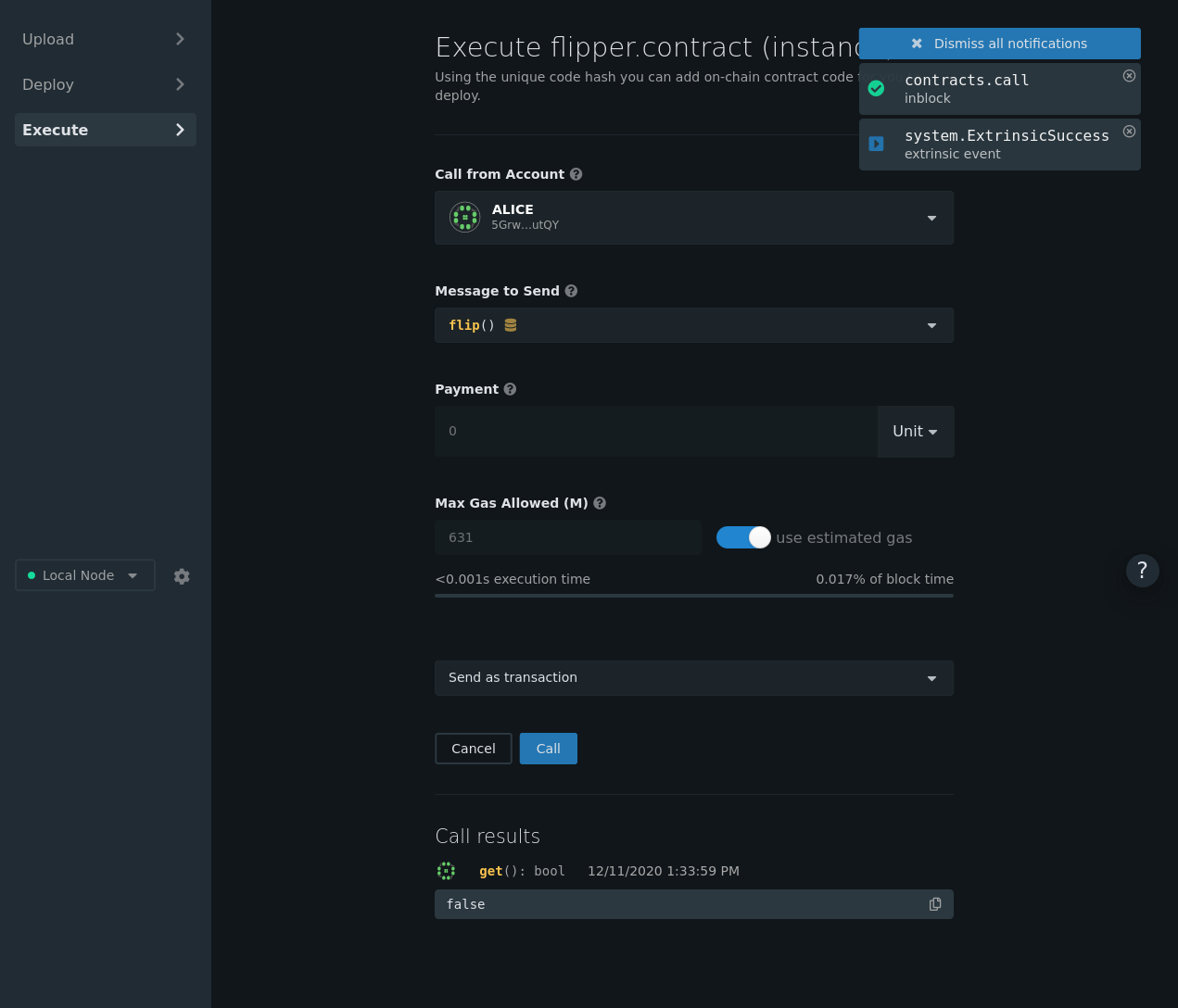 If the transaction was successful, we should then be able to go back to the get() function and see our updated storage: 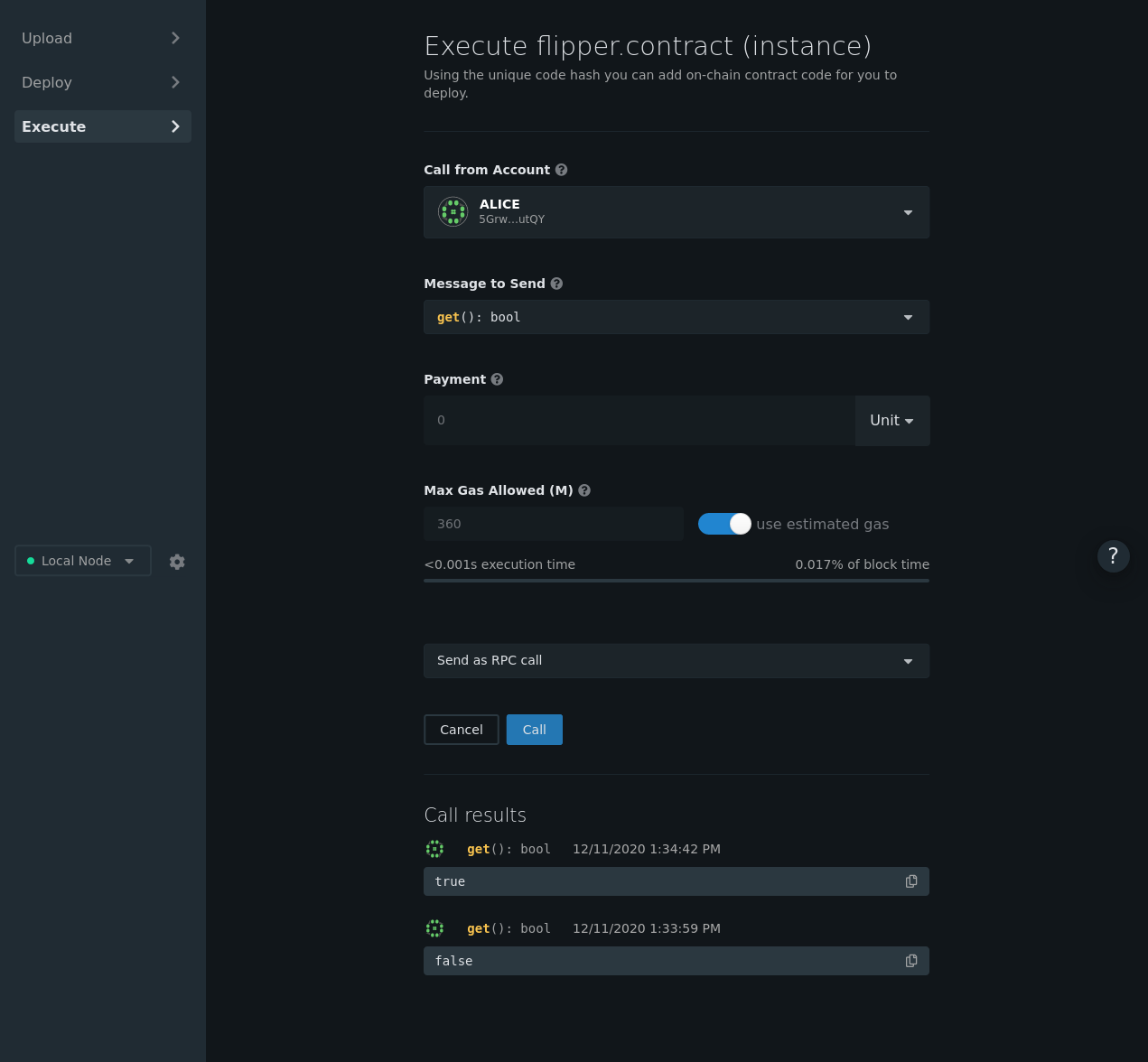 We will not go over these setup and deployment steps again, but you can use them throughout the tutorial to deploy certain contract on-chain.

The rest of the tutorial will have template code which you will use to walk through the different steps of contract development. Each template comes with a fully designed suite of tests that should pass if you programmed your contract correctly. Before you move on from a section, make sure that you run:

and that the tests all execute successfully without any warnings.

Here are solutions to some of the common problems you may come across:

There is a known issue with the Substrate block production (BABE) on a running chain. If you stop your node for too long (closing the terminal, putting your computer to sleep, etc...), you will get the following error:

Canvas UI uses its own local storage to track the contracts that you have deployed. This means that if you deploy a contract using the UI, and then purge your Canvas node, you will be prompted to reset your local storage and please do so. And then re-deploy any contracts and re-do any steps that you may have done before on your node.

3. Send as Transaction vs Send as RPC

When interacting with contracts using the Canvas UI, you have the option to submit your call as a transaction or as a RPC: 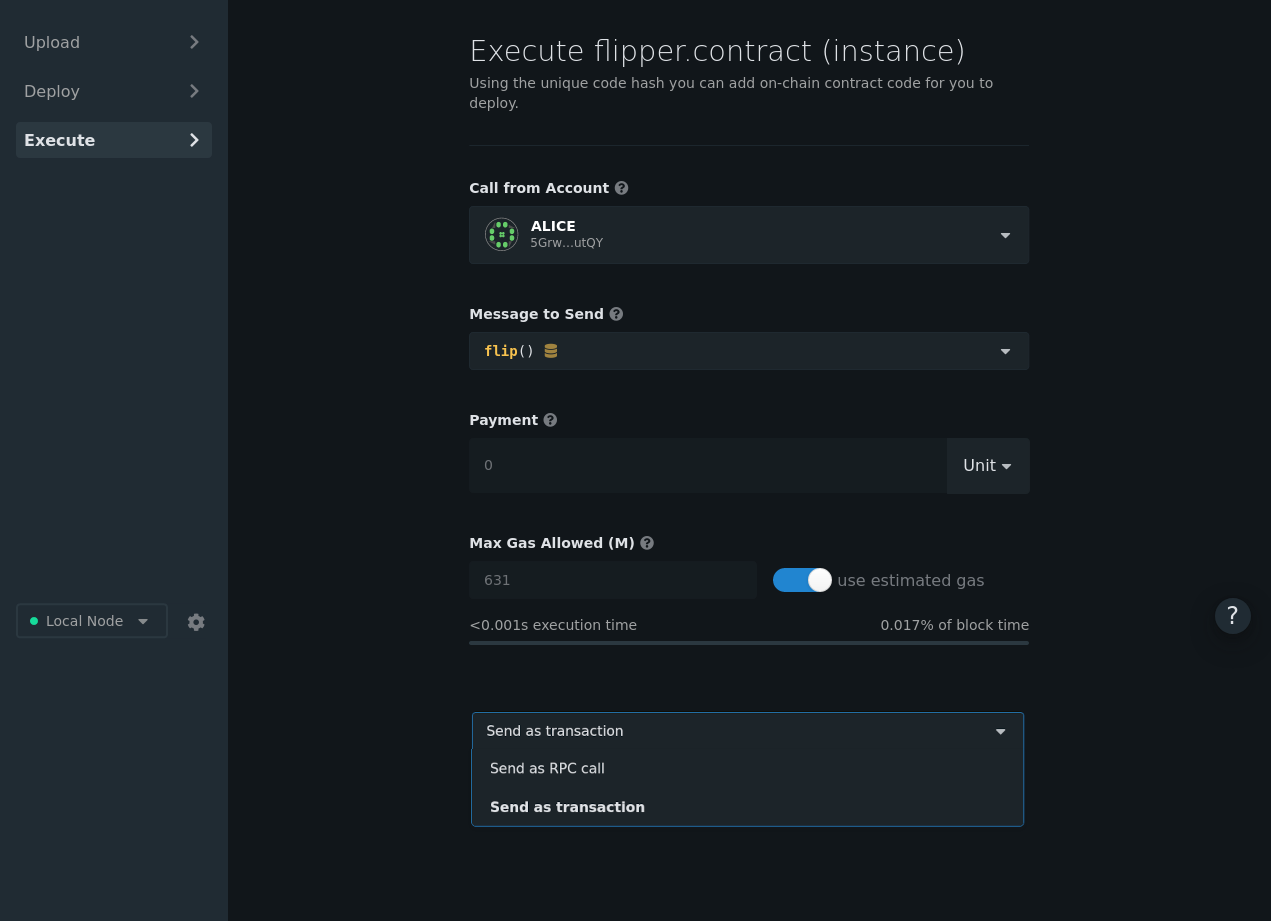 When you send as a transaction, it should be exactly as you expect. A transaction is submitted to the contract, a fee is deducted from your account, and the state of your blockchain can change. In these situations, no value is returned from your contract call, only a "Success" or "Failed" extrinsic message along with any events it may emit.

However, there may be some calls that you want to "test", rather than actually submit a transaction, or you may want to peek at the value that would be returned if you called the contract function. For these scenarios, you submit an RPC call, which will run all of your contract logic, but not actually submit a transaction or update the chain state. However, you will still need to specify the right amount of gas to cover your "virtual fee". But don't worry, nothing will be charged when making a call this way. :)

If you run into any other issues during this tutorial, please report an issue!