One of the defining features of the Substrate blockchain development framework is its support for forkless runtime upgrades. Forkless upgrades are a means of enhancing a blockchain runtime in a way that is supported and protected by the capabilities of the blockchain itself. A blockchain's runtime defines the state the blockchain can hold and also defines the logic for effecting changes to that state. 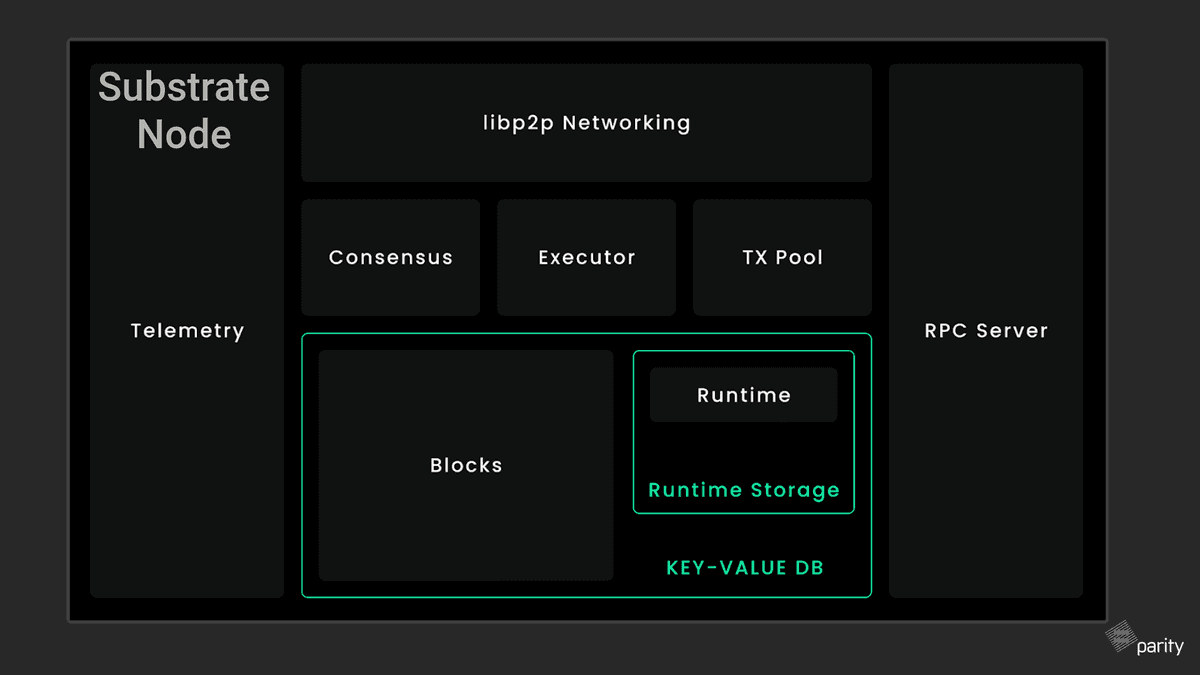 Substrate makes it possible to deploy enhanced runtime capabilities (including breaking changes(!)) without a hard fork. Because the definition of the runtime is itself an element in a Substrate chain's state, network participants may update this value by way of an extrinsic, specifically the set_code function. Since updates to runtime state are bound by the blockchain's consensus mechanisms and cryptographic guarantees, network participants can use the blockchain itself to trustlessly distribute updated or extended runtime logic without needing to fork the chain or even release a new blockchain client.

If you have problems with this tutorial, the Substrate community is full of helpful resources! We maintain an active Substrate Technical chat room and monitor the substrate tag on Stack Overflow. You can also use the subport GitHub repository to create an Issue.

Please do note that your problem may have already been solved on Stackoverflow or Subport. Do a search first for keywords in your error messages and concepts, and if you found them useful as well, comment to let us know that it's a common issue to escalate for a fix.

What You Will Be Doing

Before we even get started, let's layout what we are going to do over the course of this tutorial. We will:

1. Use a sudo call to include the Scheduler pallet in a live runtime.

This part of the tutorial will step you through launching a Substrate chain and initiating a simple runtime upgrade using the Sudo pallet.

Since forkless runtime upgrades do not require network participants to restart their blockchain clients, the first step of this tutorial is to start the template node as-is. Build and start the unmodified node template.

Leave this node running! Notice that the node will not be restarted as part of this tutorial despite the fact that two runtime upgrades are performed. You will be editing and re-compiling the node's runtime code, but do not stop and restart the node to prove to yourself that the runtime upgrade is in fact done on an active (dev) network, not a rebuilt or restarted one.

By default, the well-known Alice account is configured as the holder of the Sudo pallet's key in the development_config function of the template node's chain specification file - this is the configuration that is used when the node is launched with the --dev flag. This means that Alice's account will be the one used to perform runtime upgrades throughout this tutorial.

Dispatchable calls in Substrate are always associated with a weight, which is used for resource accounting. FRAME's System module bounds extrinsics to a block BlockLength and BlockWeights limit. The set_code function in the System module is intentionally designed to consume the maximum weight that may fit in a block.

The runtime upgrade should consume the entire block to avoid extrinsics trying to execute on a different version of a runtime when called. Although theoretically one may be able to use transaction priority and carefully study the FRAME logic involved to allow for other extrinsics to be dispatched in the same block as the upgrade, it is a very poor idea to try to do this for almost any blockchain: it is worth to spend one block to keep this operation clean and reduce chance of error. This study is outside the scope of this tutorial.

The set_code function's weight annotation also specifies that the extrinsic call is in the Operational class of dispatchable function, which identifies it as relating to network operations and impacts the accounting of its resources, such as by exempting it from the TransactionByteFee.

Use sudo to dispatch

As the name of the Sudo pallet implies, it provides capabilities related to the management of a single sudo ("superuser do") administrator. In FRAME, the Root Origin is used to identify the runtime administrator; some of FRAME's features, including the ability to update the runtime by way of the set_code function, are only accessible to this administrator. The Sudo pallet maintains a single storage item: the ID of the account that has access to the pallet's dispatchable functions. The Sudo pallet's sudo function allows the holder of this account to invoke a dispatchable as the Root origin.

The following pseudo-code demonstrates how this is achieved, refer to the Sudo pallet's source code to learn more.

In order to work around resource accounting within FRAME's safeguards, the Sudo pallet provides the sudo_unchecked_weight function, which provides the same capability as the sudo function, but accepts an additional parameter that is used to specify the (possibly zero) weight to use for the call. The sudo_unchecked_weight function is what will be used to invoke the runtime upgrade in this section of this tutorial; in the next section, the Scheduler pallet will be used to manage the resources consumed by the set_code function.

Here we allow for a block that may take an indefinite time to compute intentionally. This ensures that our runtime upgrade does not fail, no matter how complex the operation is. It could take all the time it needs to succeed or fail.

Next, add the pallet to the runtime:

Add the following trait dependency at the top of the file:

The final step to preparing an upgraded FRAME runtime is to increment its spec_version, which is a member of the RuntimeVersion struct:

Take a moment to review the components of the RuntimeVersion struct:

In order to upgrade the runtime it is required to increase the spec_version; refer to the implementation of the FRAME System module and in particular the can_set_code function to to see how this requirement and others are enforced by runtime logic.

Keep your node running! You should use a new terminal to compile the runtime

Here is a solution to check against in case you're stuck. See the diff in the commit history for details.

Here the --release flag will result in a longer compile time, but also generate a smaller build artifact that is better suited for submitting to the blockchain network: storage minimization and optimizations are critical for any blockchain.

As we are only building the runtime, Cargo looks in runtime cargo.toml file for requirements and only executes these. Notice the runtime/build.rs file that cargo looks for builds the Wasm of your runtime that is specified in runtime/src/lib.rs.

When the --release flag is specified, build artifacts are output to the target/release directory; when the flag is omitted they will be sent to target/debug. Refer to the official documentation to learn more about building Rust code with Cargo.

Use this link to open the Polkadot JS Apps UI and automatically configure the UI to connect to the local node.

Some ad blockers and browser restrictions (e.g. the built-in Shield in Brave browser, and https requirement for socket connection in Firefox) interfere with connecting to a local node. Make sure to check them and, if needed, turn them off. You may not get connecting from a remote IP (like polkadot.js.org/apps/) to a local node working. If you are unable to solve this, we encourage you to host your app locally, like the apps UI.

Use Alice's account to invoke the sudoUncheckedWeight function and use the setCode function from the system pallet as its parameter. In order to supply the build artifact that was generated by the previous build step, toggle the "file upload" switch on the right-hand side of the "code" input field for the parameter to the setCode function. Click the "code" input field, and select the Wasm binary that defines the upgraded runtime: target/release/wbuild/node-template-runtime/node_template_runtime.compact.wasm. Leave the value for the _weight parameter at the default of 0. Click "Submit Transaction" and then "Sign and Submit".

After the transaction has been included in a block, the version number in the upper-left-hand corner of Polkadot JS Apps UI should reflect that the runtime version is now 101.

If you still see your node producing blocks in the terminal it's running and reported on the UI, you have performed a successful forkless runtime upgrade! Congrats!!!

Next up, we will:

Now that the node template has been upgraded to include the Scheduler pallet, the schedule function can be used to perform the next runtime upgrade. In the previous part, the sudo_unchecked_weight function was used to override the weight associated with the set_code function; in this section, the runtime upgrade will be scheduled so that it can be processed as the only extrinsic in a block.

This upgrade is more straightforward than the previous one and only requires updating a single value in runtime/src/lib.rs aside from the runtime's spec_version.

Keep in mind that this change will not cause all accounts with balances between 500 and 1000 to be reaped - that would require a storage migration, which is out of scope for this tutorial.

This will override any previous build artifacts! So if you want to have a copy on hand of your last runtime Wasm build files, be sure to copy them somewhere else."

In the previous section, the Scheduler pallet was configured with the Root origin as its ScheduleOrigin, which means that the sudo function (not sudo_unchecked_weight) can be used to invoke the schedule function. Use this link to open the Polkadot JS Apps UI's Sudo tab: https://polkadot.js.org/apps/#/sudo?rpc=ws://127.0.0.1:9944.

You can use the template node's command line output or the Polkadot JS Apps UI block explorer to watch as this scheduled call takes place.

After the target block has been included in the chain, the version number in the upper-left-hand corner of Polkadot JS Apps UI should reflect that the runtime version is now 102.

You can then observe the specific changes that were made in the upgrade by using the Polkadot JS Apps UI Chain State app to query the existentialDeposit constant value from the Balances pallet.

Last edit: on
Run into problems?
Let us Know
ON THIS PAGE
Introduction
What You Will Be Doing
Learning outcomes
Sudo Upgrade
Schedule an Upgrade
Next Steps